The Queen of the Tearling by Erika Johansen 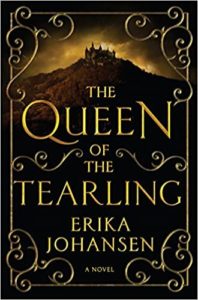 In this book, the first of a trilogy, we follow Kelsea Raleigh, a young princess, as she comes out of hiding in order to claim her throne. This might sound like a typical fantasy story featuring a spunky young princess, but it’s deeper (and darker) than you might expect. While definitely a fantasy novel, there are sci-fi elements too as we realize that Kelsea’s ancestors sailed to this new land to escape modern technology. The capital of her kingdom is called “New London,” a very familiar sounding name, so as you read the book, you wonder what happened in the past, and if this is really a dystopian novel after all.

Kelsea’s quest to retake the throne is not an easy one. A lot of people would prefer her dead. There is a lot of political intrigue in this novel, and a lot of violence, so it’s not for the faint of heart. Some have even compared it to Game of Thrones. I’m not sure I would go quite that far, but it’s definitely a great read and I recommend it. The mysteries, secrecy, and the fleshed-out characters will keep you wanting to read more.